By registering with KRDL you'll be able to download all of the best Tokusatsu completely free! So what are you waiting for? Register now!
[RAW] B-Fighter Kabuto
AllAVIMP4MKV 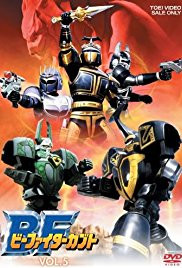 Ten years after the destruction of Jamahl, Earth has returned to peace again. The Earth Academia has become the Cosmo Academia, a scientific research organization, where Takuya Kai works with Sage Guru on a new generation of Insect Armor in the event of another threat to the Earth. This threat is realized when a Cosmo Academia exploration submarine comes across a fissure in the ocean floor, out of which rises a huge flying fortress of the ancient tribe Melzard. This clan has been resting for millennia and seeks to destroy mankind. Matriarch Mother Melzard sends her oldest sons Raija and Dezzle to lead the attack with Raija's Elebamamoth. By then, Guru has infused the Neo Insect Armor with Insect Power, creating the three Command Voicers to link three humans with the armor. Kengo Tachibana and Ran Ayukawa, who have been selected to wear the new armor, ready themselves and become B-Fighter Kuwagar and B-Fighter Tentou. But the person to become B-Fighter Kabuto had not been chosen when the remaining Command Voicer flies out the window. Ran and Kengo follow it to meet Kouhei Toba, a star athlete at his school who is losing badly to Elebammoth who froze the boy's sister as the last Command Voicer flies into his hand. Kengo and Ran are shocked that this high school student is to be B-Fighter Kabuto, but they go to him and teach him how to transform. He changes into Kabuto and the three of them attack Elebammoth and several henchmen, with Kabuto killing Elebammoth. Refusing to accept defeat, Mother Melzard continues her attacks, with Raija and Dezzle working against each other in their attacks on the B-Fighters.