By registering with KRDL you'll be able to download all of the best Tokusatsu completely free! So what are you waiting for? Register now!
Bakuryuu Sentai Abaranger
AllAVIMP4MKV 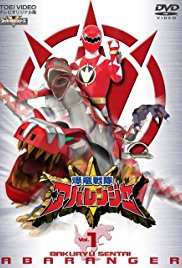 Scientists at first believed that the dinosaurs were wiped out by a meteorite 65 million years ago, in truth the meteorite split the Earth into two dimensions: Dino Earth & Another Earth. Dino Earth is the Earth where the Dinosaurs are the superior species while Another Earth is the Earth in which humans are the dominant species. In Dino Earth, a long raging war between the inhabitants known as the Dragon People and the Evolions(a entities from the meteorite) has commenced for as long as anyone could remenber. One day, Asuka of the Dragon People traveled to Another Earth via a trans-dimensional portal and was followed by the Evoliens who had three Bakuryu(dinosaur mechas) under their own control. As the Bakuryu attack Tokyo, a distress call was sent to three humans with "Dino Guts" to tame each of the three Bakuryu. Upon taming their own Bakuryu, the three lucky humans have form the team known as Abaranger with the sole purpose of protecting their Earth from the Evoliens.