By registering with KRDL you'll be able to download all of the best Tokusatsu completely free! So what are you waiting for? Register now!
Choujinki Metalder
AllAVIMP4MKV 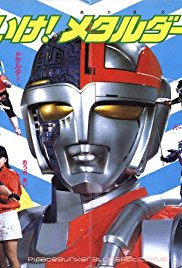 During World War II, robotics expert Professor Koga was assigned by the Japanese military to create robotic soldiers, which would be turned loose against the allies. That is, until he got word that his son, Tsurugi Ryuusei, had been killed in battle. He then washed his hands clean of the whole thing, locks away the prototype, and takes the plans with him. Four years later, Makoto Dolbara, A former colleague of Professor Koga, becomes leader of an organization called the Neross Empire. He then orders his robots to kill Professor Koga, who survives the attack. He then heads for the secret base, and activates the prototype, which eas designed to look like his son. however, despite the Professor's pleas, the robot (Metalder) showed little reaction. The robot then tries to respond to the professor's cries, in which it would be too late. Seeing his dead "father", the robot then swears that it would be the Neross' worst nightmare.