By registering with KRDL you'll be able to download all of the best Tokusatsu completely free! So what are you waiting for? Register now!
Chouseishin Gransazer
AllAVIMP4MKV 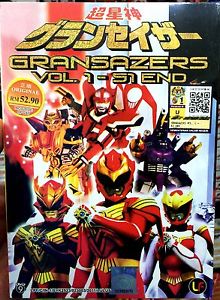 Some 400,000,000 years after an advanced human civilization was destroyed by aliens, 12 direct descendants of the civilization's warriors (called "Sazers") have their powers awakened and form four tribes: Flame, Wind, Earth and Water. Each Sazer is based on a Zodiac sign represented in an animal totem or spirit representation. At first, they wage war on each other, but after learning the truth of their ancestry and their reason for awakening, the Gransazer tribes unite to protect Earth from the Warp Monarch, an alliance of various alien species, from once again extinguishing all life on the planet.