By registering with KRDL you'll be able to download all of the best Tokusatsu completely free! So what are you waiting for? Register now!
Choushinsei Flashman
AllAVIMP4MKV 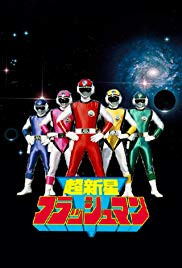 In 1966, five kids were abducted by an extra terrestrial group known as the Alien Hunters for the Reconstructive Experiment Empire Mess for the purpose of experimenting on human subjects. The kids were rescued by the Flash alien race an arch enemy of the Mess, and were each take to a different planet for safe asylum in the Flash solar system. Each child was trained separately with a different form of super power as a way for each of them to defend themselves from the Mess Empire. As time progressed the kids' bodies have adapted to the Flash solar system and have grown up as adults with super human powers. By 1986, all five of the now grown children have returned to Earth to protect it from the Mess Empire as a team known as the Supernova Flashman.