By registering with KRDL you'll be able to download all of the best Tokusatsu completely free! So what are you waiting for? Register now!
Go! Princess Pretty Cure
AllAVIMP4MKV 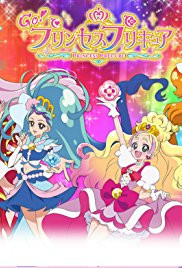 A long time ago, a young girl named Haruka Haruno dreams on becoming a Princess like the ones in fairy tales. However, she is always being bullied by her classmates in kindergarten due to her dream. She later met a boy named Kanata who gave her a strange charm while having her promise to never give up on her dreams. A few years later, now 13 years of age, Haruka attends the Noble Academy boarding school while still cherishing her dreams of becoming a princess like one from her picture books. One day, she encountered two fairy creatures from the Hope Kingdom: Pafu and Aroma, who were followed by a strange man named Close. The fairies told her that he works for Dys Dark, lead by a witch named Dyspear who wants to bring despair to the world by locking dreams away in the Gate of Despair. With Haruka having no choice, the charm she had turned out to be a key and the fairies gave her a Princess Perfume, becoming one of the Hope Kingdom's chosen warrior: Cure Flora, a Pretty Cure to oppose ...