By registering with KRDL you'll be able to download all of the best Tokusatsu completely free! So what are you waiting for? Register now!
Gosei Sentai Dairanger
AllAVIMP4MKV 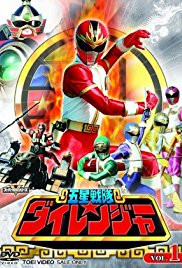 Over 8,000 years ago, the Daos civilization flourished in Southern China. The Daos Empire consisted in three tribes: Dai, Shura (ancestors of today's humanity) and Gorma who lived harmonously. However, one day the Gorma Tribe tried to take over the Empire. Thus began the war between the Gorma and the Dai Tribe. The battle continued for 5,000 years, led by the Gorma Triumvirate. The Mythical Chi Beasts appeared to oppose the Gorma, whose magical powers had increased to the point where they could turn themselves into monsters. Five Dai warriors' chi powers had increased to the point where they could control the Mythical Chi Beasts. The war ended with the disappearance of both the Dai and Gorma Tribes. In 1993, the Gorma Tribe, one of the Daos' two missing branches, revived to take over the world. To counter them, Master Kaku assembled a team of five youths with high levels of chi. They became the Dairangers of present time.