By registering with KRDL you'll be able to download all of the best Tokusatsu completely free! So what are you waiting for? Register now!
Healin Good Pretty Cure
AllAVIMP4MKV 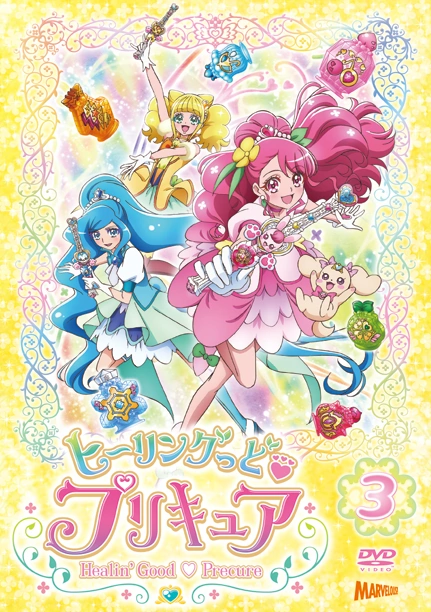 Thirteen-year-old Nodoka Hanadera recently moved to the town of Sukoyaka with her family in hopes that it can give her a fresh start from her life in the city. Meanwhile, in a place deep inside the Earth known as the "Healing Garden", everything is in ruins after an attack from an antagonistic group called the Byogens, whose goal is to infect the Garden and slowly poison the planet. Its ruler, Queen Teatine, entrusted the care of her daughter Latte to three Healing Animals - Rabirin, Pegitan and Nyatoran - who are on a mission to go to the surface world and find three people whose hearts can resonate with their paws and can partner with them. While on Earth, both Nodoka and the fairies witness an attack from the Byogens and in a sudden twist of fate, Rabirin meets up with Nodoka, who despite her somewhat frail condition, is determined to protect others. This resonated with Rabirin and resulted in Nodoka becoming the Pretty Cure foretold in legend, Cure Grace. Joined in by Chiyu (Cure Fontaine), Hinata (Cure Sparkle) and Asumi (Cure Earth), the four girls form the Healin' Good Pretty Cure team in order to fight against the threat of the Byogens and protect all life on Earth along with the Healing Garden.