By registering with KRDL you'll be able to download all of the best Tokusatsu completely free! So what are you waiting for? Register now!
J.A.K.Q. Dengekitai
AllAVIMP4MKV 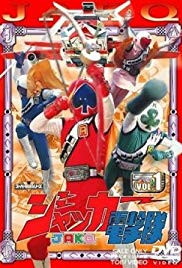 The Crime organization lead by the fear less Iron Claw has the sole mission of becoming the most powerful syndicate in the world by employing an army of leather masked thugs and cyborg assassins to assist in various illegal activity. To neutralize this group, the ISSIS (International Science Special-Investigation Squad) was formed by placing various faction across the globe including one in Tokyo, Japan. The commander of the Japan branch, Daisuke Kujirai a.k.a. Commander Joker has proposed an cyborg enhancement experiment that will help out the ISSIS. By recruiting four young adults each with a different occupation and background, the newly formed team has become the J.A.K.Q. Blitzkrieg Squad. Four bionic cyborgs with playing cards as their motif have the ability and technology to crush the Iron Claw's Crime Organization.