By registering with KRDL you'll be able to download all of the best Tokusatsu completely free! So what are you waiting for? Register now!
Jumborg Ace
AllAVIMP4MKV 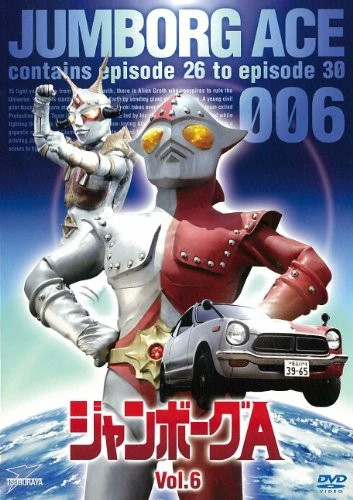 Young air delivery boy Naoki Tachibana is out to deliver a package for his grumpy boss Daisaku Banno, when his older brother Shin'ya, who commanded the defense force, PAT (Protective Attacking Team), was killed in an attack by a giant monster called King Jyglus (which was sent by the evil alien Anti Go-Ne of the planet Groth). When PAT retaliates against a second attack by the monster, Naoki, in retaliation for his brother's death, suicidally tries to ram his air delivery plane into the monster, to their shock. When the monster downs the plane, Naoki and his plane are teleported into an energy dimension by an Ultraman-like alien from Planet Emerald. The Alien Emerald has instantly used his technology to completely modify the plane, as well as Naoki's wristwatch. He suddenly finds himself back in his cessna's cockpit in the real world, but he hears the Emerald Alien's voice, telling him to activate his wristwatch, and upon shouting the command "Jum-Fight!!!", his jet transforms into the giant cyborg, Jumborg Ace, with Naoki, in a virtual reality movement-control suit, piloting the robot from inside the head with his own physical movements! He fights with King Jyglas, eventually destroying the monster. But his battle against the Groth Aliens has only just begun...