By registering with KRDL you'll be able to download all of the best Tokusatsu completely free! So what are you waiting for? Register now!
Juukou B-Fighter
AllAVIMP4MKV 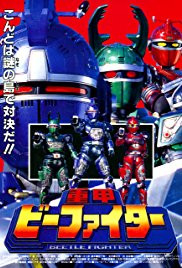 Insects all over the world begin to swarm for unknown reasons, with other animals and plants acting strange as well. To investigate this, Takuya Kai is dispatched with an Earth Academia group. Investigating independently, Takuya finds Guru who reveals that insects are preparing for battle against invaders from another dimension. Offering their aid, the Earth Academia create suits of armor to combat the threat as the Jamahl arrive to Earth to enslave humans. Though they have trouble perfecting the Bio-Machinery, Guru arrives to infuse the armor with the life force of many insects. Once the suits become the B-Commanders, one suit chooses Takuya while the other two bond to Daisaku Katagiri and Rei Hayama. With their newfound power, the B-Fighters fight to drive back Jamahl's forces.