By registering with KRDL you'll be able to download all of the best Tokusatsu completely free! So what are you waiting for? Register now!
Kamen Rider V3
AllAVIMP4MKV 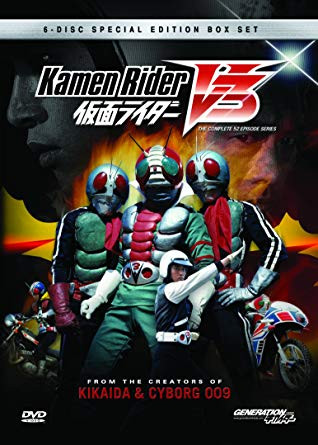 Shiro Kazami accidentally witnesses a murder by the evil organization Destron, making him their next target. In their first attempt, they planted a bomb pebble into his coffee, but the attempt was foiled when Shiro's sister, Yukiko, surprised him, causing him to spill his coffee. In their second attempt, they attacked him while practicing motorcycle racing with Tobei Tachibana. In their third attempt, a Destron soldier, disguised as a doctor, tried to put a poison shot in Shiro, while he was being transported to the hospital (after Destron's second attempt), but Shiro regains consciousness and kills the soldier. Meanwhile, a young woman named Junko Tama stumbled upon Destron's base. Suddenly, she was attacked by Destron. While trying to escape, she ran into Shiro, who was heading home on his motorcycle, but Shiro didn't see the Destron soldiers. Surprised, Junko fainted and Shiro took her home. While Junko was being taken care of by Shiro's family, Shiro reported her story to the police. When he returned home, he found his family being murdered by the Hasami Jaguar, a jaguar monster with blades for hands. Hasami Jaguar then prepares to kill Junko and Shiro, but is stopped by Shiro's high school teacher, Takeshi Hongo, who transformed into Kamen Rider 1. Shortly after he drove off the Destron forces, Kamen Rider 2 shows up, but too late. A vengeance-fueled Shiro asked the Riders to turn him into a cyborg, but the Riders refused, explaining to Shiro what would happen if he did get turned into a cyborg: he wouldn't be able to live up to his family. Then the Riders asked Junko for the location of the Destron base she stumbled upon earlier. The next day, the Riders infiltrate the base, only to find no one inside until they heard the voice of their old foe The Great Leader Of Gel-Shocker who revealed that the Gel Shocker Leader was just one of his forms. To make matters worse he attempted to kill the Double Riders with the Cyborg Disruptor Ray, Until Shiro shows up and saves their lives, but gets injured in the process. The Riders had no choice but to turn Shiro into a cyborg. When the Riders were attacked and almost killed, by Kame Bazooka, Shiro shows up as Kamen Rider V3. Now, Shiro uses his new power to protect mankind against Destron.