By registering with KRDL you'll be able to download all of the best Tokusatsu completely free! So what are you waiting for? Register now!
Kousoku Sentai Turboranger
AllAVIMP4MKV 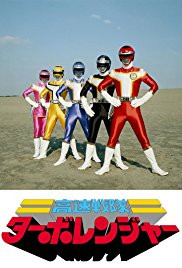 Twenty thousand years ago, the Fairy race was known to of aided humans in battle against the Boma Tribes. After what seem like a never ending fight, the Boma Tribes were sealed away by the combined forces of the fairies and humans. In present day, due to pollution and man's destruction of nature, the power of Fairy magic has since weakened, allowing the seal to be broken and the Boma Tribes have escaped. With the help of Doctor Dazai, Chiron, the last of the fairies, summons five high school seniors who each have the "flames of spirit" of the fallen fairies. Donning new powered suits, the product of a collaboration between Chiron's fairy magic and Doctor Dazai's science, the five youths became the Turborangers. Upon their new responsibility they must balance their days of fighting with their regular school lives, in order to defeat the Boma Tribes.