By registering with KRDL you'll be able to download all of the best Tokusatsu completely free! So what are you waiting for? Register now!
Ninpuu Sentai Hurricanger
AllAVIMP4MKV 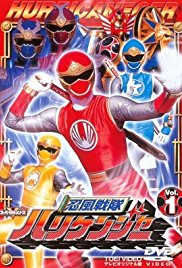 In one of the top ninja schools, three students aren't exactly fitting in. When they skip out a class meeting, space alien ninjas known as the Jakanja infiltrate the school and capture the entire school. Mugensai, their teacher, turns himself into a hamster to run away from the attack. The trio was taken to a secret base by Oboro, Mugensai's daughter and given Hurricane Gyros, devices to become the legendary Hurricanger to fight the threat. As the battles endure two students from a rival school decide to present themselves to the Hurricanger. It happens that the Goraijer has discord with them. If the Goraijer defeat the greatest ninjas, the Hayate Way ninjas, they will become the greatest. The Hurricanger don't understand this, they just want to get along against a common enemy. The Goraijer team up with the Jakanja because they believe they have a common enemy in the Hurricanger. The Goraijer later betray the Jakanja by leaving them and some of them seek vengeance in them. The ...