By registering with KRDL you'll be able to download all of the best Tokusatsu completely free! So what are you waiting for? Register now!
Seijuu Sentai Gingaman
AllAVIMP4MKV 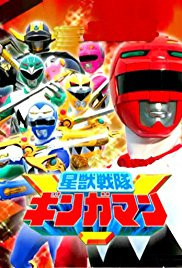 Three thousand years ago, the Space Pirates Barban invaded Earth. The Star Beasts and the first Gingamen, warriors of the Ginga Forest, fought them with a mystical power known as Earth and eventually imprisoned them. The Ginga people later cloaked their forest within marked boundaries and passed on the duty of the Ginga warriors through generations.

In the present day, Hyuuga, Hayate, Gouki, Hikaru and Saya are chosen as the 133rd warriors of the Star Beast Swords. Ryouma is very happy that his elder brother Hyuuga succeeds to the title. When Elder Ohghi holds the succession ceremony of Star Beast Swords, an earthquake breaks the seal on the Barban.

Ohghi orders the 133rd warriors to get the Ginga Braces hidden in Roaring Mountain. However, the Barban attacks them to prevent the birth of the new Gingamen. During the battle, Hyuuga is swallowed into a crack in the ground created by the Barban's leader, Captain Zahab. Enraged, Ryouma activates his hidden Earth power and awakens the Ginga Braces. The Gingaman fight together with the Star Beasts against the Barban, who desire to revive the Demon Beast Daitanix, on whose corpse they built their castle.