By registering with KRDL you'll be able to download all of the best Tokusatsu completely free! So what are you waiting for? Register now!
Ultraseven X
AllAVIMP4MKV 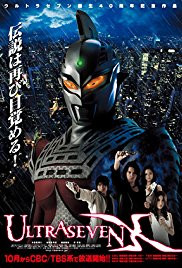 Ultra Seven X is a 2007 tokusatsu Cyber Punk Dirty Martini Spy Fiction series produced by Tsuburaya Productions. It is a Darker and Edgier reimagining of the classic Ultraseven series.

In the 23rd century, Deus agent Jin has contracted amnesia and is in a strange apartment. Upon waking up, he sees that he has a strange item, the Ultra Eye. With it, he can change into the mysterious giant called Ultra Seven X. Now, he must fight the alien invaders that threaten his world and figure out the mystery behind his missing memories.